There is a definite ” nip in the air” as they say here, so time to start thinking about getting cosy again.Maybe a Fleece and Harris Tweed headband to keep your ears toasty,

or a Fraoch’s Grian Tartan headband guaranteed to brighten up the dreariest of days.

…and if your traipsing the hills and streams your toes will want to be warm too.

These Harris Tweed and Fleece Welly socks, are Tweed at  the top, and the remainder fleece.

Or even better a pure new wool Aran hat, knitted in Skye too, of course.

…and matching fingerless gloves. Oh ,and before you go,check out those perfectly painted nails.
No they are not mine,unfortunately !!!
A huge thanks to my sister, Shona, and niece Iona, for being models, bit of arm twisting required, but I
know you will agree they did a perfect job. 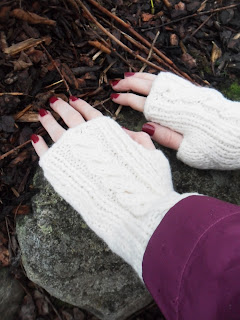 After our fabulous Summer we have already had rain. Lots of it. Lots and lots. So the waterfalls are now full to overflowing again, and most days there is at least one rainbow,

,some times, if you are lucky, there are two.

But as this is Skye, the weather changes almost in the blink of an eye, so you just have to go for it anyway. So the other day as Poppy and I were out for one of our morning strolls, we saw another familiar couple of eyes watching us.This wee seal often pops up, when its not expected. Well, when is a seal expected actually, anyway there it was watching us.

Until Poppy got a little too close…

…and suddenly the Seal got all shy, and disappeared instantly.

…but really that was fine as there were another 9 just further up the Loch basking in the early morning sunshine. You can just spot the ninth one on the left,making a splash as it made a quick escape.


Poppy sat watching them for quite a while though ……….. 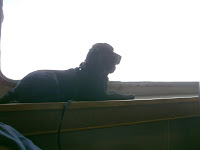 This week we were in Harris and Lewis with Poppy (obviously), and we took the Morris Minor, as it
seemed a suitable mode of transport for the narrow Hebridean roads. Lewis and Harris, although very seperate in identity and landscapes, are in fact the same island, the largest of the Hebridean islands.. Poppy caused a few second glances as she sat in the window of the ferry, at one point she even edged forward to tickle the shoulder of the elderly passenger in front.. but we stopped her before she managed ! 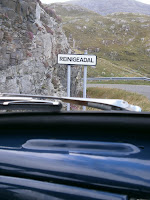 This is the
road to
Rhenigidale. It was only built in 1990 with the assistance of EEC funding, as prior to that ,the only access to the village was via boat, or a 3.5 mile walk from the nearest village of  Tarbert. Quite a walk for the postman each day !! There are 8 or 9 houses there, one of which is now a youth hostel.

What was really amazing though,was the roads Or maybe just the ones we chose to go on. There were signs on single track roads, saying “beware road narrowing”, there were waterfalls that almost landed on the road, and hairpin bends, blind corners, and steep gradients seemed to be the norm! Not the place to go to to see how well your handbrake works!! 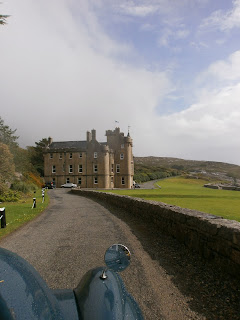 This is Amhuinnsuidhe Castle, a  hunting and shooting lodge. Surprisingly, the main single track road runs right in front of this castle, so you can peek in . The castle, originally built in 1865 for the Earl of Dunmore, has a now famous link with Harris Tweed. It was the Earls Mother, Lady Catherine, that brought the attention of Harris Tweed to the masses, by initially taking samples of cloth to London.
We then went to Lewis, and travelled to Stornoway, and then on to Uig ,with such heavy rain and winds, we were delighted the roof never blew away… the joys of a  1967 convertible.( really we never doubted “wee Morris”, but it was gale force 7 !!!) The beaches at Uig are well worth the long tedious journey to get there,as they are white,and still fabulous in the rain , and go on for miles and miles. Thankfully the wee Morris Minor coped admirably,kept us warm and dry, and 251 miles later, the majority of these miles undertaken at approximately 40 miles per hour, we were back in Skye.

First wedding this year for  Morris .

After a long Winter tucked up warm and cosy in a corner of the garage ,Morris has emerged from his hibernation. 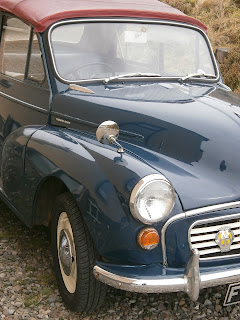 Our wee Morris Minor convertible has passed all the tests, including a few long drives to make sure there were no splutters.Now he is ticking along quite happily,proudly displaying new road tax, and look how much it cos.Makes me wish all road tax cost this… 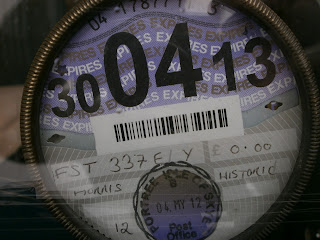 The wedding was at Dunvegan Castle, and we had perfect blue skies and sunshine for the newly weds, and I think its fair to say, Morris looks quite at home there, at the door of the castle. 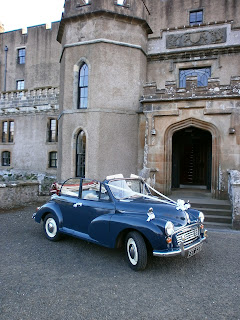 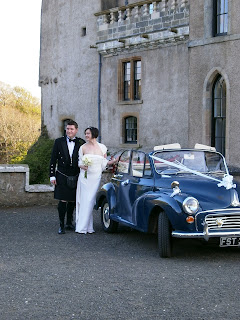 Now all we need are lots more sunny and warm days, so Morris does not have to go back into the garage before the next Skye wedding in June. 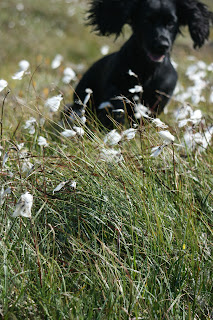 Not sure who was most delighted be out in a field of gorgeous Bog Cotton, with the sun shining, Poppy or me !! 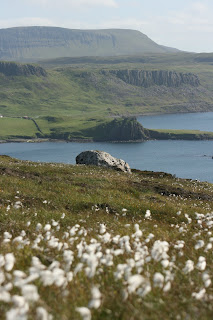 Bog Cotton blowing in the breeze, and blue skies,and warm enough to be wearing a t-shirt without several layers on top of it, Summer in Skye !

Connect us @ The Tartan Company